Just got back from a massive European tour of three whole days with good friends Sebastiaan Cornellisen and Frans Vollink. First stop was Bremen in Germany and a short tour of the city courtesy of our fine host, Helge. Bremen has the Beck’s factory. Look, here it is. 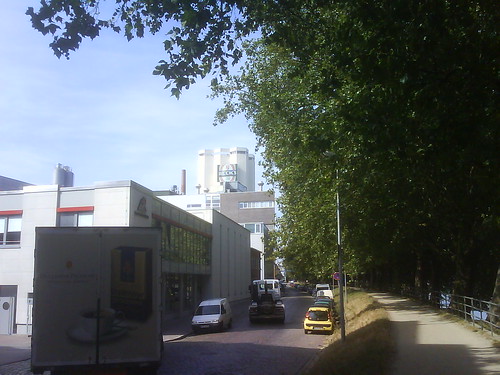 So there’s the origin of joy and pain right there.

There *was* actual music played on this tour; it wasn’t just a tour of the outsides of beer factories, fascinating though that might have been.

Er, moving swiftly on, here are a couple of video clips from the Bremen gig. The second one is just a little HD version of the same tune but I think it offers a good argument for filming all future videos in HD. You’ll need to check it out at YouTube to see the better quality HD video and it is BIGGER too. I think all of the gig was filmed, so I’m sure more will surface on the interweb. Hmmn, not much movement going on there, is there? Perhaps a dance routine might work next time. Maybe some pyrotechnics…

The other two gigs were in Holland: one at Cafe de Stier in Eibergen, and the other at Lambooij Huis in Hengelo. Seb and Frans, bless their cotton socks, recorded and filmed the Hengelo gig so more stuff from that may surface. Seem to remember the second set from Hengelo was pretty good. When it does come out I’ll put it on my YouTube channel right here.

After a day off back in England I headed out to Wales to play with the Tony Woods group. First to Swansea Jazzland and then Cafe Jazz in Cardiff – both fantastic places to play and fine audiences and great people running the shows; always a pleasure to play there.

Having some time to spare in Cardiff I wandered down to Gamlin’s Music Shop and, with the assistance of the wonderfully helpful chap there, tried out four PRS guitars and, in particular, two gorgeous Santana IIIs. Two hours later and I’m completely blown away by the playability of this guitar. It’s like all of a sudden there’s all this extra stuff you can do on the instrument. On the Steven Wilson record I did all his guitars are PRS and they sounded rather splendid too. I’m, like, totally sold on getting one.

In the dream within the dream, and if the planets were aligned and I were Derren Brown, I’d make the neck ever so slightly slimmer, move the volume pot nearer and add some coil tappage and maybe some freakish things like a Kaoss pad or a kill switch, but on a guitar like that I’m not sure whether that’d feel right. I’m sure it would sound good though. Anyway – you’re backintheroom! And there’s a gig in Cardiff to do…

Ah. Oh, dear. Must remember to not play the guitar of my dreams before I have to do a gig on the, albeit my fault entirely, guitar of my nightmares. The frets on my guitar look like a child’s drawing of the sea or better yet, like a bad Yngwie-set-up-translation-error – “I said scallop the FRETBOARD, dumb-ass. Now you’ve unleashed the…” etc. [Hopefully, you’re thinking WFT are you on about? That’s good, just count your blessings and go about your day] Joyously, all the notes at the 10th fret fret-out, which is ok if you want to sound like a bad sitar. I should just give the damn thing a set-up but I’m always on it so it never gets done; it could do with some love and attention though. Anyway, the gig in Cardiff was ok but everything that came from my guitar was progressively more disappointing. After the PRS it felt like trying to run a race in wellies. That’s such a lame analogy but at least I can bring you, ninja-like, to my next offering.

I’m going to do the Great North Run in May and this has forced me into getting off my arse and doing something other that staring at a computer trying to figure out Space Designer or some other such bottomless pit of possibility. I have this book that progresses over 13 weeks. You start out running (or in my case, wheezing) for eight five-minute chunks divided into 30 seconds’ running and 4 1/2 minutes’ walking, and then the ratio between the two gets moved along over the 13 weeks until (with the blessing of Magutron – god of Arcturus) I’ll be running non-stop for about 50 minutes. Honestly, that sounds utterly impossible. Wish me luck.

What else? I went to see a screening of The Firm. I played guitar on the soundtrack. There’s a moment of glory right at the end where it’s just me playing solo guitar over the end credits. Ah, the familiar scenario: blissfully flailing away while everybody leaves. Speaking of my film-composing better half, there’s an amazing gig coming up of the music of Vernon Elliot. She’ll be arranging some music including some of the Clangers music. Here’s where it gets awesome – I (possibly… don’t get your hopes up yet) might be playing the swanee whistle. This will be good. Very good. 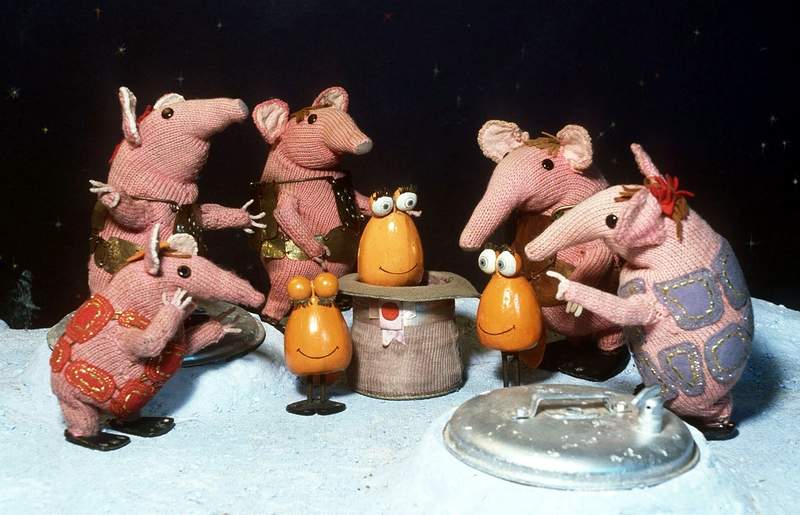 Been working on my album too. Running into all kinds of problems there. I guess having to solve problems is a big part of creative work, and there are all kinds of problems: musical, technical, equipment, and so on. For instance, I have this tune where I want the guitar to sound angelic and light, maybe a bit like you’re holding your breath.. that kind of thing, can’t explain exactly what I mean. And I’ve got no idea how to make it happen. Hopefully a new axe will solve everything :)

But just writing this has made me think of paintings so maybe a trip to the National Gallery is in order.

So, that’s my gibberish for now.