Today marks the first day of a month of working on my album. Here’s what I got from day 1. 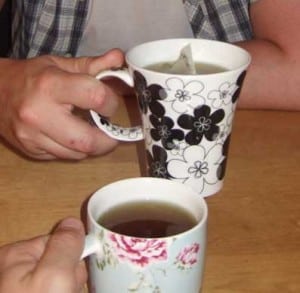 First step was to trot over to Digital Village to buy some AKG 414s, or maybe a pair of 214s and a ribbon mic… But, I was given a left turn by the prospect of trying a matched pair of sE4400a mics for a few days. So, armed with the 4400s and with the arrival of drummer Matt Home, I started recording what I thought would be a series of loops for me to chop and change at will. But Matt turned out to have such an unbelievably great feel, I abandoned that in favour of letting him have-at-it for a few takes, and then off to Munson’s for lunch.

In the grander scheme of things, yes, I got some drums recorded. My first intentions went by the wayside. But that’s ok, better things happened. Lesson No.1 – go with the flow.

I’d mentioned about the recording on Facebook and Twitter, and consequently I’ve gotten masses of good advice re: mics. Also, I videoed the recording and showed it to my good buddy James Knight, who also gave me some stellar advice on mic placement, and what effect it would have on the recorded sound, different polar patterns, phase issues, and more. But all after the fact.

So – lesson No.2 – I’m reminded that you learn most by doing. If you’re sat on your arse, practicing your scales, reading books, thinking ‘practice, practice, and THEN I’ll be ready’. Stop right now. You’re wasting your time. Put your foot out – publicly – and have a go. You’ll learn so much more. But, and here’s the rub, you need people who are not afraid of letting you know the things you need to know. And that’s where your friends, followers, mates, and networks like Twitter, Facebook, A Jam Session, The Pub, and so on, make the difference.

So, what about the brain surgeon? Do they just ‘have a go’? Surely there must be a line you have to cross. I wonder if a brain surgeon would say that after the first ‘proper go’ they learned more? Or was it all prep?

Shot myself in the foot there, eh?

Anyway, off to edit some drums…