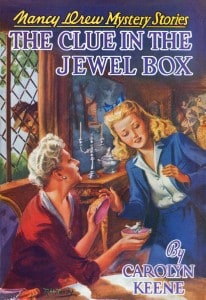 I’m going to be adding lessons/transcription/articles/guitar stuff and so on under the banner of ‘The Jewel Box’ so you’ll be able to search for them under that tag.

For starters, here’s an old Guitarist column, I’ll upload a new [old] one every now and then. Let me know if they’re of any use. The content of all the columns is pretty random. Sometimes it’s simple stuff like this; sometimes it’s a bit more involved.

And here’s the music + TAB

Here are some ways to target the IV chord of a 12 bar blues. The IV chord usually happens in bar 5. In other words, if you’re playing a blues in G, it’s how to get from the G7 chord to the C7 chord. Here are four variations on this theme.

Example 2 uses a Db13 that resolves down a semitone to the C7. I’ve placed the chord on beat 2 to call more attention to the chord and thus heighten the tension. Db7 is a tritone substitution for G7.

Example 3 places an Ab-7 before the Db9. Also Iâ€™ve missed out the top note on this example to vary the sound of the harmony. Think of the G13 voicing in example 1 in three segments â€“ 1, the bass note [the G] 2, the 3rd and 7th [the B and F] and 3, the extensions [the E and A]. Now try removing one or more segments of the chord to change the sound. For example, donâ€™t play the bass note, or, just play the 3rd and 7th. This is an easy way to get more mileage out of what you already know.

Example 4 uses a sequence that descends in whole tones to target the C7. These variations are often suggested by the bass player, [as the music is happening – not over a pint after the gig] and the soloist might alter their improvisation to reflect the suggested harmony.

So, that said, anyone else got any classy ways of arriving at the IV chord? Please share them here…

Comments on The Jewel Box No.1 Targeting Chord IV In A Blues