The Ancestry Of A Male Bee

A while ago, I was teaching at the Glamorgan Summer School. Mr. Jack Jones, the trumpet player (and retired maths teacher, and ultra nice guy) in my class, told me this story of the ancestry of a male bee. Sitting comfortably? Then I’ll begin…

Here’s a little diagram to show you this sequence. 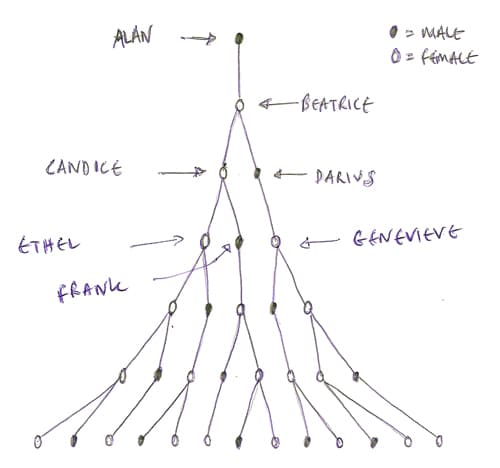 Now, if all that sounds like gibberish, check out this guy doing a much better job of explaining it all.

Anyhow, apiarists have known this for hundreds of years. Scarlett Johansson and Steve Vai know it. But it was Fibonacci who introduced the idea to the West in his Liber Abaci [not this]. The number of bees in each generation, going backwards, is therefore called – the Fibonacci sequence; i.e., [0] 1, 1, 2, 3, 5, 8, 13, etc. And this has many interesting properties.

Here’s one pattern: Look at the last row of 13 black and white dots on my diagram above. It’s the same arrangement as a piano keyboard.

More Fibonacci numbers: there are 13 notes in one octave (C to C), 8 white notes and 5 black notes.

You could go on and try to find the answers to the universe or justify your belief that spiders created the world as we know it or whatever, or you could just use the patterns to mess around with and see what you can come up with.

For example, check out this video of a Tool song to which someone has kindly added an explanation as to how they used the Fibonacci sequence in the song.

Not sure I totally agree with their idea of living your life like a Fibonacci sequence. It might get a bit messy when ordering the next round, for instance. But Fibonachos, that could work…

There are some interesting reads on the Fibonacci sequence here. And check this Bobby McFerrin video out too.